The Vancouver Art Gallery opened in 1931 at 1145 West Georgia Street, after years of effort and lobbying by the citizens of Vancouver, most agressively represented by the members of the B.C. Art League. The Art League was an organization formed to promote the opening of an art school (accomplished in 1925 with the Vancouver School of Decorative and Applied Arts), and a civic art gallery.

The Gallery hosted its first major exhibition in 1932 with the All Canadian Exhibition, a juried show of work by artists from across Canada.

The Vancouver Art Gallery prospered, even though it opened shortly after the stock market crash of 1929 and the beginning of the depression. There was a famous event in Vancouver art history during that time, when the Art Gallery was occupied for days by a group of unemployed men protesting the fact that money was available for art, but not to feed them. The group was eventually expelled, leaving behind no damage to the building or to the art which was on display, but a large mess was left on the floors.

The Graduates' Association of the art school started a newsletter called The Smock Pocket, a mimeographed collection of information about graduates and their doings. The Spring 1936 edition was the second issue of the newsletter, and noted that "The Annual Exhibition of the Vancouver School of Art" will take place this year from May 29th. until June 7th, in the North Room of the Vancouver Art Gallery. The Opening Ceremony takes place at 2:30 P.M. on the 29th, at which time the presentation of diplomas to this year's graduating class will also be made."

1940 art lectures
In 1935 Arthur Lismer, one of the members of the Group of Seven, was traveling through Western Canada on a lecture tour with more than one purpose, and he noted in a confidential report to the National Gallery his comments about the Vancouver Art Gallery:
"In Vancouver the Art Gallery classes under the direction of Mr. Charles H. Scott, principal of the Vancouver School of Art and Design, are a lively and stimulating expression of child art study. They are well organized with a competent and interested staff. The course is a little more formal in the application than the Toronto Art Gallery's effort and the range of activity more restricted, but it does not suffer on this account. It is merely that the activity must grow out of the personal expression of the children themselves and by experience of studying their needs plus the experience of their guides and teachers the progress and new forms of application of the free study plan will develop."

The Gallery expanded its building, opening a new wing on Georgia Street on September 26, 1951. In the period from 1931 to 1950, which is the main focus of this project, the Gallery hosted almost 1,000 different exhibitions. Many of these were traveling shows from Eastern Canada, the United States, or Europe, and thus outside the "scope of work" of this project, but the Gallery also extensively supported the local art community. They hosted the B.C. Society of Fine Arts exhibitions from 1932 until 1967, many solo and retrospective exhibitions, and also hosted their own long-lasting series of juried "B.C. Artists" exhibitions.

In 1983 the Gallery made a major move and expansion into the old Vancouver Courthouse on Georgia Street, renovated for them by famed Canadian architect Arthur Erickson as part of the Robson Square downtown core redevelopment project. The Gallery took the opportunity to produce a major retrospective of their history (and Vancouver's) in "Vancouver: Art and Artists 1931 - 1983" (see below). 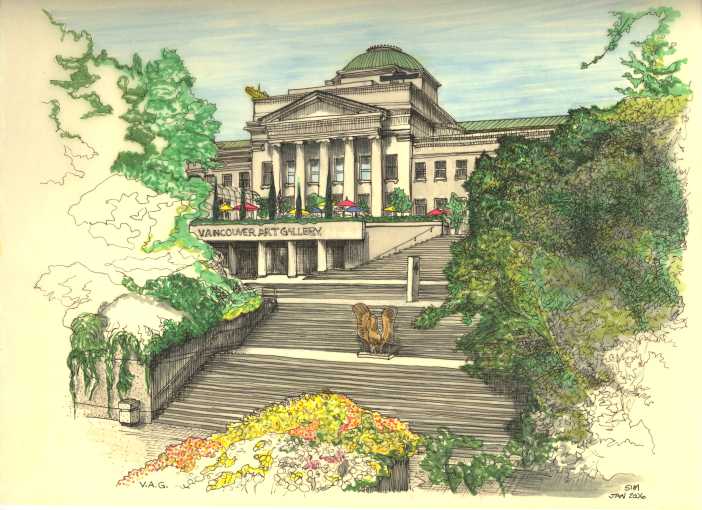 A Gary Sim sketch of the Vancouver Art Gallery.